I had grand plans for photography and posts this past week, but my schoolwork got me bogged down, so much so that I even missed my usual Sunday post.  Now it’s nearing the end of the long weekend and the weather has cooperated to get out for a round of golf, so a quick image and then I am off.  After a long winter and lots of time during the week spent at the computer, I have to have my priorities!  Have a great week everyone!

So far I have been concentrating on learning to effectively use Topaz Studio for standard editing, like I would do through On1 Photo Raw or Luminar.  I still have a ways to go to figure out exactly how this would work into my regular workflow, but I decided to do a departure this week and play around with photo art instead.  I watched a few tutorials during the week and one of them featured a new (to me) adjustment called AI Remix.  The effects that the presenter was creating looked really interesting, so that’s where my focus has been this week, along with the more familiar to me adjustments through impression and simplify.

This first image was shot with my Panasonic camera whilst in Botswana, and it was after the sun went down so the image was incredibly dark and noisy; completely unusable as a regular photograph (just being 100% honest).  But, I loved the posture of these two bull elephants jostling in the shallows of the Boteti River, and knew I could make something fun with the image, even if it wasn’t an something that I would traditionally mark as a keeper.

This next image is of a goliath heron.  I wanted to simplify the details without losing all the texture and pattern of the feathers, and bring out colours and tones that reminded me of old film images.  The result looks like a cross between a painting and a snapshot from an old point and shoot camera, but for me the image works.  Perhaps because it brings back memories of the type of pictures I would see around cottage properties when I was younger.

This last image is bit hectic, but it fits with the subject, the amazing African Wild Dog.  The combination of adjustments I used diffused the background significantly, but in doing so brought out repeating patterns of triangles in the vegetation which corresponds with the triangular shape of the dog’s ears.  It almost feels like the dog rushed through a huge pile of fallen leaves and quickly laid down, while the leaves slowly drifted back down to the ground.

Creating painterly images or abstracts from photos isn’t everyone’s cup of tea, but it is something I enjoy playing around with once in a while.  Topaz Studio definitely provides a lot of different options to use to create these types of images.  Because I own the Topaz plug-in collection, I have access to a lot of these tools that aren’t available within the free portion of the software.  The AI Remix adjustment is one that I currently have on trial, and it’s something I would need to experiment more with to figure out if it is a tool I’ll want to have available once the trial period is over.

One of the things that surprised me most about Amboseli was spending time watching the birds in the marsh.  I had gone there expecting flat plains, lots of dust and lots of elephants, and I definitely got that, but the birds were an unexpected surprise.  I guess you could say I didn’t do a ton of research on the area before going there, and perhaps that is a good thing, as then surprises await at every turn on the road.

Today I have a rather large selection of bird images, I hope you enjoy seeing some of the feathered beauties of Amboseli.

https://shopvida.com/collections/voices/jennifer-sawicky for textiles inspired by my photography.

I was so excited when I had the chance to watch a goliath heron two evenings in a row; I wasn’t so impressed with the light and weather conditions I had to photograph them.  Hopefully one day I will see one of them again in more favourable conditions; until then, here are a few of the photos I captured 🙂

Have a great evening! 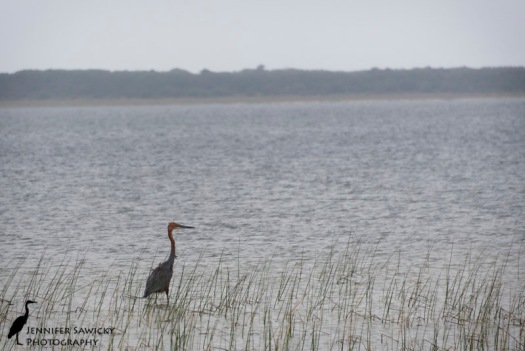 We left so early for our walk today I didn’t bother grabbing my camera, and as we were leaving the dike I was kicking myself for it.  This would have been so much better shot with something other than my phone.  I’ve never before seen a heron perched on the top of the power lines.

I’m sure the purpose of the orange floating plastic is to prevent debris from entering the pumping station (which is to the left just out of the shot), but this time of year, the only purpose seems to be separating murky water from even murkier water.  The herons seem to find it a great place to spend the mornings, as it has been a rare walk the few months when I haven’t seen a heron in or around this location. I was lucky as I was able to get quite close to the heron to take the photo below.  Spencer stayed calm and quiet and I think we got within about 15 feet before the heron started looking a bit uncomfortable, so we backed off to allow it to get back to searching for some breakfast. For some reason, seeing this heron perched on one leg reminded me of tree pose in yoga class.

A few weeks ago, I came across a heron perched on a water level post along the dikes, and while I was able to create an interesting silhouette from the photograph I took, it wasn’t at all how I had envisioned what the final image would look like.  Since I had never seen a heron on that post before, I didn’t think it likely I would get the chance to try again for the shot I wanted, but it came only a week later.  This time, I was able to approach slowly enough to shoot from a few different angles, and get some crisp shots of the heron. © Jennifer Sawicky 2013-2020. Unauthorized use and/or duplication of this material without express written consent is strictly prohibited. Links may be used, provided that full and clear credit is given to Jennifer Sawicky & Jennifer Sawicky Photography with direction back to the original content.